Yes, leaving Carbondale for “Life in the Fast Lane” of Los Angeles was quite an eye opener. Scott and I packed up our things in a truck and away we went to the wonderful sunny land of California. I was “top of the heap” in Carbondale with Uncle Jon’s Band and I was ready! Scott as my manager, we were going to make a big splash in Hollywood! Little did I know that “splash” was going to be in the form of a rain puddle. Here I was.. Big Fish in Carbondale.. however, I came to realize that I may have been a big fish in the little pond called Carbondale, but LA…. I was an amoeba in the ocean… WOW, the talent was amazing, and I found out I wasn’t up to that level…YET.

I Guess I Need A Vocal Trainer…

So I’d done several auditions at this point, or should I say “Cattle Calls” since there are HERDS of people at each audition. Something close to 400-500 people trying out. It blew my mind, but I kept trying. After several unsuccessful auditions, I decided it was time to find a vocal coach. Now, I had never “trained” so this in itself was an adventure. I decided to work with “Anderson Vocal Productions” Mr. Ron Anderson and started my journey. I recall my first lesson when he told me to breathe. So I did and he looked at me shook his head and told me to lay down on the floor and I’m thinking “What???”.

It turns out when I took a breath, I would raise my shoulders, which tightened everything up. What this taught me was how to use my diaphragm properly to breathe since you can’t raise your shoulders when you’re laying down. We worked and worked and I got better and better… “technically”. I did land a couple gigs singing in the ensemble. One for “My Fair Lady” which was fabulous with the costumes and big hats! The other was in “Flower Drum Song”. I sang Memories from the musical Cats for my audition piece and the director chose me since it was his favorite song!

I’m ready for my big break! Training my voice with my coach Ron, I’ve gotten 2 gigs singing in musical theater, so it’s time to make a splash! So I did audition after audition and nothing. I even auditioned for Kid Creole, but they needed more of a dancer, which although I could move, I didn’t have the “dance” moves (remember my accident?). Getting more and more disheartened, I kept auditioning, did a few talent shows, sang at a country bar. Then I landed a gig with a band doing a showcase.

It gave my soul the lift it needed. There were 3 of us singing backup, I had never done anything like this before. It was fun I’ll have to admit. Big hair, stage smoke and tambourines but it was only a 1 time gig. 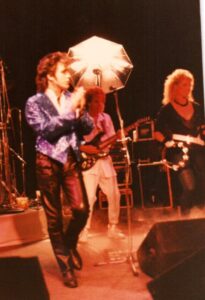 One TV talent show I managed to get on (probably via Scott) was “You Can Be A Star”. It was filmed in TN and I had to fly out there. Mom met me and we had a blast. The day of the filming came and I was all decked out for my country TV debut! Big hair, gauzy purple off the shoulder outfit with slouch boots. Stylin!

The host called me over and I remember him putting his arm around me on my bare shoulder.. yikes, kinda threw me off my game at the time…Then when they found out where I was living “North Hollywood”  guest judge Nipsy Russel said” North Hollywood, well you’re already a star!” I figured I was doomed. Yep, you guessed it, I wasn’t the “winner” between the 3 contestants.

So, back home I went and continued to audition. One audition I did was for a cruise line. Out of over 400 singers I was in the final 26 for 2 spots. I felt good about getting that far, but didn’t make the final cut.  I finally came to the realization my big break wasn’t coming YET and needed to make some money so I started working for Scotts uncle copying medical files for lawsuits etc. It wasn’t my dream job, but Uncle Nick was pretty cool.

Tail Between My Legs…

I continued to audition as time allotted, but I wasn’t getting jobs. I look back and realize that although I was now technically very good, I had lost my “feel” and wasn’t able to connect with my audience. Scott was selling cars at a car dealership and working for his Uncle Nick the PI. He was GREAT at meeting people. He had what you call the “Gift of Gab” and we met some very interesting folks over the 4 years we lived in North Hollywood.

Makeup artists, actors, directors and musicians. We were going to a Halloween party one time and a make up artist friend (Nikki?) did my hair/makeup as a lion. 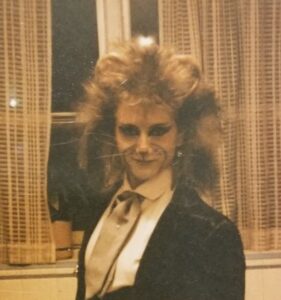 Looking back, some of the people we met just starting out are pretty famous now. Friends we met had a band “Night Warrior”. Not a big name band, but we got to know them well. Ray, Kitty, Mark and Peapod and through them and their rehearsal studio,  we met the guys from Black Sabbath.

Fun story. They were in town rehearsing over Thanksgiving and had no where to go for the holiday so we invited them over for Thanksgiving dinner. Tony Iommi, Dave “the Beast” Spitz and Eric Singer.

Of COURSE I was making a turkey and all the fixings and as we’re talking, laughing I went to open up the oven door to baste the bird, the over door fell off!. I don’t recall how we got around it, but I THINK I remember it turned out good! Ray and Laura owned the rehearsal studio and we’d all go down to the Rainbow in Hollywood. There were always plenty of Rockers there…the likes of Jimmy Page of Led Zepplin and several other “rock stars”. Laura was a good friend of Lita Ford so that was pretty exciting to meet her!

I did find a favorite jazz club in Studio City “The Baked Potato” which is still there today that we’d go to often. It was a pretty harried lifestyle back in the early 80’s and it took it’s toll on us. Like I said, it was “Life in the Fast Lane” for certain. I wasn’t singing, we were partying pretty heavily and we got caught up in all the insanity. One day I decided enough was enough I needed to get back some normalcy and Scott and I split up.

Out of the crazy and into the calm..

I was at a point I needed to get away from the craziness of the rock n roll world and take care of myself. The “life in the fast lane” of Los Angeles was getting to me. Funny as this sounds, I took up golf. They had these great par 3, 9 hole courses out in “The Valley” which were perfect. I took a few lessons and started to enjoy the relaxation of it all.

When I broke up with Scott, I stopped working for his Uncle Nick. I had to find a job and ended up working nights at a Radar assembly plant in the QC department. During the day I would bartend. Talk about no life and being calm…

So I was working at the radar plant, bartending and still doing some auditions. I met a guy at one audition and struck up a conversation on how hard it was getting gigs etc. He said he was there looking for talent for his band. He needed a singer and thought I was fantastic! Ok, now I’m all rev’ed up again. I can be a front singer in a band again! I missed singing with Uncle Jon’s Band so this was thrilling.

We met a few times to talk about the band. He had tours all set up overseas in Japan. We’d start there and work our way back to the states. I was pretty excited about all this. I was going to let my boss Richard know I was going to quit my night job and going on tour! When I talked to him about this, he was worried, but I blew it off. This was exciting to me, I was going to finally make it!

I’m not ready for romance..

So we met for dinner a few times (band leader whose name I cannot recall) and he said he was falling for me and wanted a relationship. I was NOT ready for that and my radar went up. Yep, you know what happened. He said I could only go if I was “with” him so I backed out and never saw him again. Looking back at that now and think… trafficking.. I think I dodged a bullet there.

I had kept in touch with Kitty 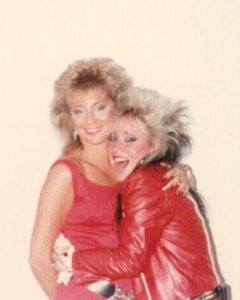 and we’d go out to the clubs when I could. Kitty had a brother that lived in Delaware and played in a band. He wanted her to come back from LA and sing in his band. She had no intention of going back, but told him she knew someone that might. It was at that moment my life was about to change… yet again…

Next up… “ON THE ROAD AGAIN”